Turn Up The Volume – Movement, Migration and Mental Health

Migration, the voluntary and/ or forced movement of people to foreign destinations is not unique to the 21st century, it has existed for centuries. It has only recently become politicised in the late 20th century and early 21st century.

Research from both the Refugee Council and ’25 child and migrant rights organisations’ (Wolfe-Robinson & Taylor, 2021) have shown that refugees and asylum seekers are ‘five times more likely’ (Refugee Council, n.d.) to have mental health needs than their UK counterparts. In the UK, in the past year, suicide rates among asylum seekers have increased where ’11 children’ (Wolfe-Robinson & Taylor, 2021) have taken their lives. This upsurge in suicide rates is due to increased anxiety and stress in awaiting their decision on their asylum claim and the potential risk of deportation. Moreover, the restrictive and draconian proposals laid out in the recently proposed UK’s Nationality and Borders Bill, according to the UNHCR, would increase the mental health challenges asylum seekers would face. 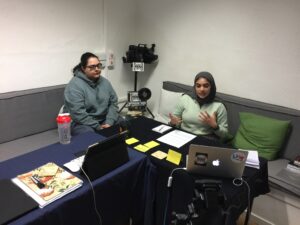 The Home Office in 2019 promised to ‘prioritise vulnerable, unaccompanied asylum-seeking children’ (Wolfe-Robinson & Taylor, 2021) however, there has been no evidence of this. Instead, there have been more harsh rulings proposed to limit the rights of migrants and ultimately, restrict the flow of migration to the UK.

As part of a collaboration project with the ‘Freedom Youth Club‘, an asylum and refugee youth club for 13–19-year-olds, and ‘Colours of Leicester‘, a local magazine I founded, I had the opportunity to interview Azra, one of the managing youth workers of the youth club. She spoke about her role and responsibilities as a youth worker, and how the youth club acted more as a “lifeline” for some of the young boys, as without the space, they would be alone and isolated. 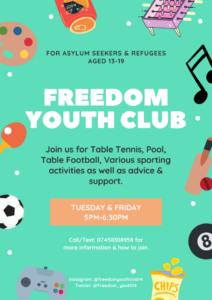 Moreover, speaking to the young boys, I learnt more about their interests, hobbies and their aspirations for the future. The young boys shared with me their experiences of Leicester and, with the youth club. From them, I learnt the youth club was more than a place they could hang out two days a week, it was a space that offered support in a myriad of other ways, from helping with housing issues to applying for grants. This space was where they felt safe and comfortable to seek help from youth workers and a place where they could meet new people in a similar position and form a small community.

This relationship between migration and mental health is not new and needs to be urgently addressed.

To find more information on what the Freedom Youth Club do, you can look at their website or you can find them on Instagram @freedomyouthclub14.

Also, you can find the collaboration work we did on Instagram @coloursofleicester.